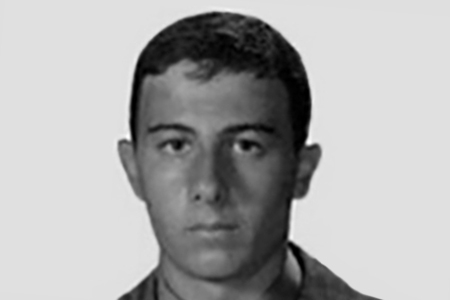 Civil guards Juan Merino Antúnez and Antonio Jesús Trujillo Comino were killed in San Sebastian by ETA in the early hours of 9 July 1985. They were on guard duty at the Revenue Office’s San Sebastian branch on Calle Oquendo. Two terrorists wearing red neck scarves, typical of the San Fermín fiestas in Pamplona, approached the police car pretending to be among the thousands of young people who were heading back from Pamplona to towns and cities in the Basque Country.

When they reached the vehicle, they both started firing simultaneously through the side windows of the car, killing the civil guards instantly. They were found slumped over one another, having been shot in the head, neck and shoulders.

Juan and Antonio had only been stationed in San Sebastian for two months, having recently graduated from the College for Young Civil Guards in Valdemoro (Madrid). They were both from Madrid and were in charge of guarding the offices of the Treasury Department, which had been attacked on several occasions and been the subject of frequent bomb warnings. Juan was 21 years old. He was married and had no children. Antonio was 22 years old. He was single but was due to be married the month after his killing.