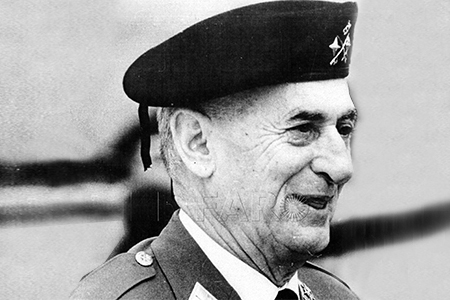 General Víctor Lago Román was in his official car being driven to his office in the headquarters of the Division, located in the municipality of El Pardo. The car had just crossed the Avenida de los Reyes Católicos and was about to merge onto the road to La Coruña, when two members of ETA’s Argala Command on a motorbike approached the car from the right and fired several bursts of machine-gun fire, before speeding off. “We were machine-gunned from a motorbike by two guys in anoraks who came up from our right. The bike came up beside us and the youths fired two or three bursts from a machine-gun,” reported Juan Carlos Villalba, the soldier driving the vehicle, who was wounded in the attack. A doctor, the first person to arrive on the scene, saw General Lago Román lying in the back seat of the car in a pool of blood, next to his cap and a riding crop. He had been shot three times to the head, killing him instantly. Despite the risk, the general had refused to travel without his uniform or to remove the emblems from the official car. He had also declined to have a bodyguard on the grounds that he did not want anyone else to be harmed if he was attacked.