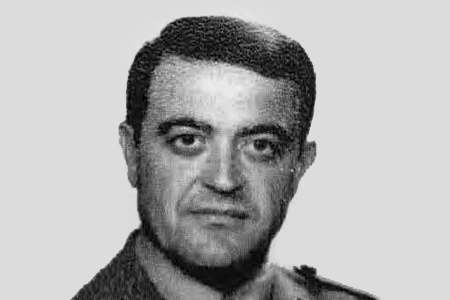 Born in: Andalucía
Age: 47
Offspring: 4
Marital status: Married
Job: Lieutenant of the Auxiliary Scale of Engineers of the Army
Date of the attack: 23/05/1994
Place of the attack: Madrid
Weapon: Bomb attached to the underside of the car
Killed by: ETA

On the morning of May 23, 1994, Army Engineer Lieutenant Miguel Peralta Utrera got into his car with his fifteen-year-old daughter Laura. He dropper her off at her secondary school on Paseo de los Melancólicos and took the Extremadura road to go to the headquarters of the Strategic Transmissions Command in Prado del Rey. At Kilometre 6 of the road, a limpet bomb attached by ETA terrorists to the underside of his vehicle exploded, causing his death. Two other people were injured in the blast. The bomb had been attached to the car since the soldier left home with his daughter.

Miguel Peralta Utrera (47) was originally from Medina Sidonia (Cadiz). He was married and had four children aged between 22 and 15.