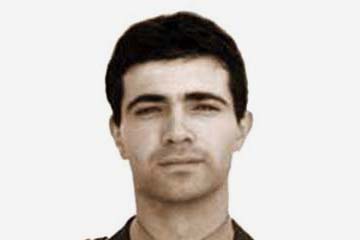 Each morning, a Civil Guard convoy consisting of a coach, a minibus and an off-road vehicle took seventy officers, aged between 18 and 25, from the Traffic School on Calle Príncipe de Vergara to the motorcycle practice ground in Venta de la Rubia, on the outskirts of Madrid. On the morning of 14 June 1986, ETA terrorists planted a van containing 35 kilograms of explosives and various kilograms of shrapnel in Plaza de la República Dominicana. They detonated the explosives as the Civil Guard convoy was passing Number 7. Twelve civil guards were killed, and a further 78 people (including officers and passers-by) were injured by the huge blast.

Miguel Ángel Cornejo Ros was from Burjasot (Valencia). He was 24 years old and married. “I think it’s inevitable that she’s crazy about her husband now, because we all know that when you get married you have that sense of excitement… All she wanted was to have a family, and he would tell her: ‘Darling, just wait till I finish here. It won’t be long now, and then we’ll have a home of our own and children, you’ll see. And they’ll be better off, we won’t lack for anything. But now, well, look…she’s crying even more,” said the officer’s mother in a report about the attack on Informe Semanal.