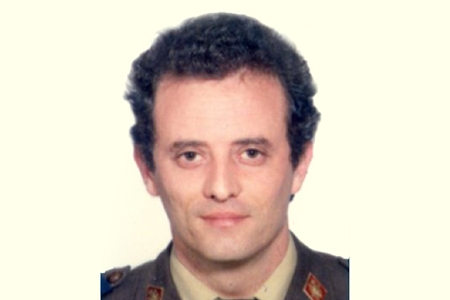 Policeman Juan Manuel Helices Patiño was assassinated by ETA in Irún on 23 April 1992. Shortly after 9 pm, the police officer, who was off duty, noticed two individuals whom he suspected of being terrorists. He phoned the 091 emergency service, which sent out two officers in an unmarked patrol car from the National Police’s Citizen Security Squad.

Before they arrived, Juan Manuel Helices Patiño got out of his vehicle and went over to the two individuals to ask for their papers. One of the suspects pulled out a handgun and shot the officer once in the head. He died two and a half hours later at the Aránzazu Hospital in San Sebastián.

The two ETA terrorists escaped by different routes. Juan Manuel’s colleague chased after one of them, but was unable to catch up with him.

In 2005 he was posthumously awarded an honorary promotion to senior police officer by the Council of Ministers.