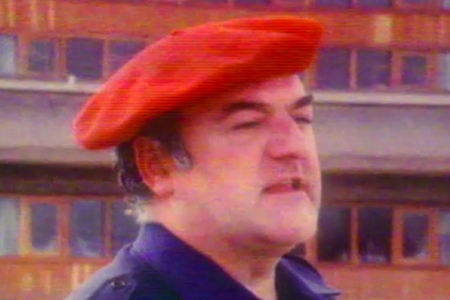 Born in: Euskadi
Age: 52
Offspring: 5
Marital status: Married
Job: Lieutenant Colonel Chief Superintendent of the Ertzaintza
Date of the attack: 07/03/1985
Place of the attack: Gasteiz
Weapon: Bomb attached to the underside of the car
Killed by: ETA

As was his custom, Juan Carlos Díaz Arcocha had breakfast in a cafeteria near Vitoria, before heading to the police academy of the Ertzaintza (Basque police force) in Arcaute on the outskirts of the city. Members of ETA had had time to place a “limpet bomb” with a line connected to the wheel, so that it would go off when the car started to move. The Ertzaintza chief left the bar, got in his car and started to drive off. The bomb exploded, blowing the vehicle into the air and seriously injuring Juan Carlos.

Other police officers who were in the bar where he had just been breakfasting rescued him from the debris and took him straight to hospital. For more than half an hour the doctors tried unsuccessfully to resuscitate him, using artificial respiration and cardiac stimulation.

The victim’s daughters, Teresa and Dolores Díaz Bada, were amongst the people behind the creation of COVITE in 1998.