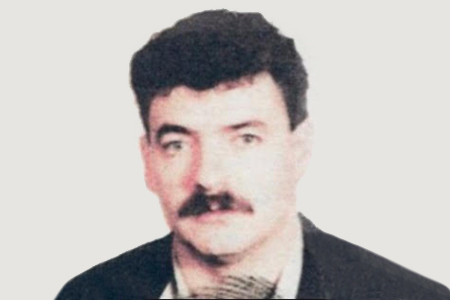 In the early morning of 27 July 1994, ETA member Valentín Lasarte shot Gipuzkoan businessman José Manuel Olarte Urreizti in the back of the head while he was playing cards with a group of friends at a gastronomic society in the old part of San Sebastián. José Manuel died shortly before two o’clock in the morning at the Nuestra Señora de Aránzazu Hospital.

The gastronomic society where he was killed, La Unión Artesana, was about 200 metres from the Gaztelupe gastronomic society where former footballer and businessman José Antonio Santamaría Vaqueriza was killed in a very similar attack in the early morning of 20 January 1993: Santamaría was also killed by Valentín Lasarte, who shot him in the back of the head while he was dining with friends in the society to celebrate the San Sebastián Drum Tattoo.

José Manuel Olarte and José Antonio Santamaría had both been identified in a report by the Public Prosecutor’s Office of San Sebastián Provincial Court as being key figures in alleged smuggling and drug trafficking rings in Guipúzcoa. This was the reason given by ETA for assassinating Olarte.

The lawyer for the two men, Fernando Múgica Herzog, was also murdered by ETA in 1996. Valentín Lasarte took part in all three murders.

Olarte was therefore killed because of allegations made in newspapers and books. The then civil governor of Guipúzcoa, José María Gurruchaga, told El País that the victim had been personally informed, three months before his murder, that ETA had detailed information on his movements.