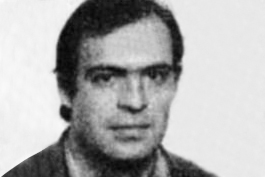 Jesús Ildefonso García Vadillo had just picked his five-year-old daughter Idoia up from school. As they were walking home hand-in-hand, a terrorist walked up and pointed a gun at his head. Jesús kicked his assailant and the first shot missed its target. However, a woman then appeared and shot him twice from point-blank range. Badly wounded, Jesus tried to get away saying ‘It’s not me, it’s not me’, while little Idoia screamed: ‘Leave my Daddy alone! Leave my Daddy alone!’. After running a few metres, he slipped and fell. He managed to drag himself along the ground as far as the wall of a supermarket. There, in front of his daughter, the terrorist shot him again, killing him. Idoia stayed by her father’s body until she was taken to a nearby pharmacy by a passing woman.

The police suspect that the ETA members mistook García Vadillo for a policeman from the barracks in Basauri whom he resembled. On the next day, the workers at the Acero Echeverría steelworks went on strike and demonstrated in the streets of Galdácano.