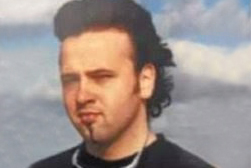 An hour before the car-bomb exploded, a member of the public called the Ertzaintza (Basque police) from his home to report an altercation in the vicinity of Plaza de Zinkoenea. A police van and patrol car went to the scene, but by the time they reached the scene, there was nobody there. A refuse container was in flames and a car had been left halfway across the street. The boot was loaded with explosives. The officers approached the car and, after an initial inspection, called for a tow truck to remove it. While they were waiting, the bomb was detonated, probably using a remote control device, by terrorist Imanol Miner. Iñaki Totorika Vega caught the full force of the blast and his colleague, who was on the radio in the patrol car at the time, was injured.
Iñaki Totorika was Basque and had been an active member of the PNV since the age of 18, as well as a member of the UGT trade union. Thousands of people attended his funeral, which was officiated by the Bishop of Bilbao, Ricardo Blázquez. A large demonstration marched through the streets of Portugalete under the slogan “For freedom. ETA NO”.