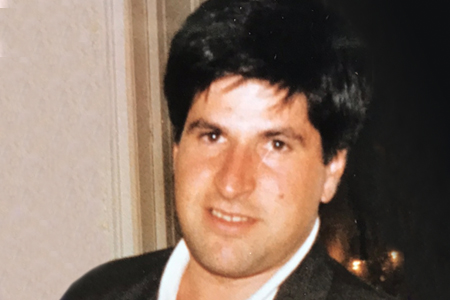 Gregorio Ordóñez had a seat on the city council of San Sebastián for the People’s Party. On the day he was killed, he was having lunch in the La Cepa bar in the city’s old quarter with a number of colleagues. Amongst them was María San Gil, who years later was to become the leader of the PP in the Basque Country. At 3.30 pm, two terrorists entered the establishment. One of them, who was wearing a red raincoat, shot Gregorio, killing him instantly. The killers immediately fled the scene. It was raining that day and nobody in the bar had been surprised that the gunman’s head was covered.
Gregorio Ordóñez Fenollar was born in Caracas (Venezuela) where his parents had emigrated following the Spanish Civil War. At the age of seven he returned to San Sebastián, where he attended primary and secondary school. After leaving school, he studied journalism at the Communication School of the University of Navarra. Shortly after finishing university, Gregorio decided to get involved in politics. wanting to do his bit in very turbulent times, marked by heinous acts of terrorism. He joined the youth wing of Alianza Popular (AP) and at the age of 24 was elected to San Sebastián City Council.
Gregorio believed that political parties should be a means of solving citizens’ problems and a vehicle for defending principles and values. He went on to hold the portfolios of Planning Legislation and later Tourism and Urban Planning on the council. During his time on San Sebastián City Council, he turned the fortunes of the party (AP and subsequently PP) around, from scarcely any public representation to become a serious contender for government. In November 1990 he was elected to the Basque Parliament for the constituency of Guipúzcoa and some months later, in 1991, he became the deputy mayor of San Sebastián.
Gregorio was a great enemy of intransigence, ETA terrorism, and the whole political and social structure behind it. This made him a clear target for the terrorists and he received numerous death threats. He was murdered a few months before the municipal elections of May 1995, in which Gregorio was to have led the PP candidacy for the City Council of San Sebastián.