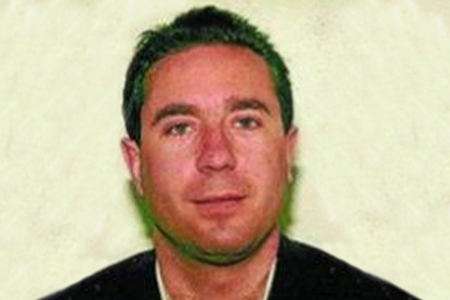 Francisco Javier Gómez Elósegui left his home in the Gros district of San Sebastian to go to work. He had only walked about 100 metres when two terrorists, a man and a woman, approached him. The man, who was wearing a hood and glasses, shot the psychologist in the head, killing him, and the two ETA members ran off.
Three plain-clothes national police officers happened to be on the other side of the street in the Soroa Bar at the time. When they saw a hooded individual go past, they ran out of the bar. However, before they had time to act, they saw Gómez Elosegui being shot. They immediately ordered the terrorists to stop and gave chase, while Francisco Javier was lying seriously injured on the ground. During the chase through various streets in the Gros district, the national police and the two ETA members exchanged a series of shots. Finally, in Calle José Arana, one of the police officers threw himself on Fernando Elejalde Tapia and managed to wrestle him to the ground.
Gómez Elosegui died as a result of shots to the back of the head fired by a terrorist. The gun used in the attack was the same one used to kill Eugenio Olaciregui on 30 January that year.
Shortly before the killing, Herri Batasuna politician José María Olarra had issued the following threat against prison officials: “You think you know our prisoners, you know their names and surnames, but we and the prisoners also know your names and surnames, your habits, your behaviour and your weaknesses”.