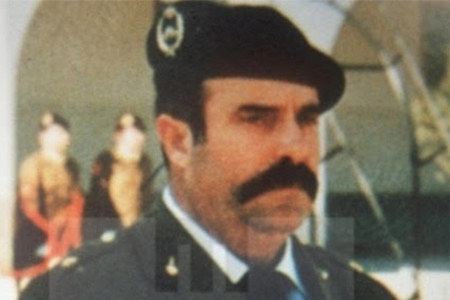 Born in: Andalucía
Age: 47
Offspring: 5
Marital status: Married
Job: Artillery Lieutenant of the Army
Date of the attack: 17/10/1991
Place of the attack: Madrid
Weapon: Bomb attached to the underside of the car
Killed by: ETA

At a few minutes before 9.00 am on 17 October 1991 artillery lieutenant Francisco Carballar Muñoz left home to drive to the Artillery Academy in the Fuencarral district. His car was parked on Calle Duquesa de Parcent. No sooner had he started the engine than the bomb that had been attached by ETA terrorists to the underside of the vehicle exploded, killing him instantly. Normally, he drove two of his five children to school —Alicia (16)  and Juanchi (17)— but that day they were not with him. The lieutenant’s eldest son, Vicente, came down the stairs of their home shouting: “Daddy, Daddy”. On reaching the remains of the car, all he could do was embrace his father’s body.

The attack on Lieutenant Carballar was the first of a series of explosions that spread terror throughout Madrid. An hour later, another ‘limpet-bomb’ exploded under a car in Calle Camarena. Inside were administrative assistant María Jesús González Gutiérrez and her daughter Irene Villa González. María Jesús lost part of her leg and forearm and Irene, aged thirteen, lost both legs and several fingers on one hand. At 11.20 am, in Calle Pablo Casals, a third device exploded under the car of Major Rafael Villalobos Villa, who lost both legs and suffered other severe injuries.