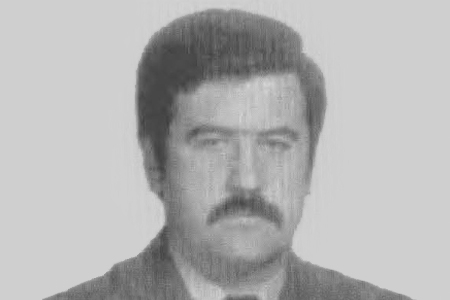 Born in: Castilla y León
Age: 33
Offspring: 0
Marital status: Single
Job: First Corporal of the National Police in the Company of the General Reserve of La Coruña
Date of the attack: 05/06/1981
Place of the attack: San Sebastián
Weapon: Others explosives
Killed by: ETA

The vehicle in which Esteban Álvarez Merayo was travelling was part of a convoy of six National Police vans which were heading towards the barracks in Loyola. The officers had taken part in a security operation in San Sebastián and other towns in the province, to deal with demonstrations and rioting against the possible extradition of ETA member Tomas Linaza from France. Having finished their day’s work, they were on their way back to base at the barracks in Loyola.

As the officers were driving along the motorway between the districts of Amara and Loyola a large bomb went off. The van in which Corporal Álvarez of the National Police was travelling was caught in the blast. Esteban died almost instantly and the other four police officers in the vehicle were all injured. The device contained a large quantity of Goma 2 and 8–10 kilograms of nuts and bolts of varying sizes.