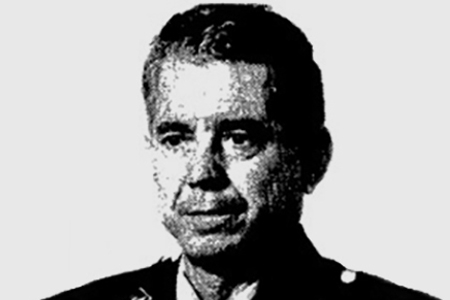 Born in: Castilla y León
Age: 52
Offspring: 2
Marital status: Married
Job: Lieutenant of the Air Force
Date of the attack: 05/06/1991
Place of the attack: Madrid
Weapon: Bomb attached to the underside of the car
Killed by: ETA

Lieutenant Enrique Aguilar Prieto left his home shortly before 8.30 on the morning of 5 June 1991 to drive to work at the Cuatro Vientos air base. He had travelled little over one kilometre when, at No. 115 CAlle General Romero Basart, in the district of Aluche, Madrid, a bomb exploded under his car. It had been attached to the car by ETA and was set off when the officer braked his vehicle. The blast killed the lieutenant and injured four young women, two seriously, who were at a nearby bus stop waiting to go to class. A guard who witnessed the attack described the scene as being “like an atom bomb”. Lieutenant Enrique Aguilar Prieto, originally from Palencia, had lost his daughter a year before to leukaemia. He had another two children, and the eldest, who was training in the military, always used to take a lift to the air base with him. On that morning, however, he was not there.