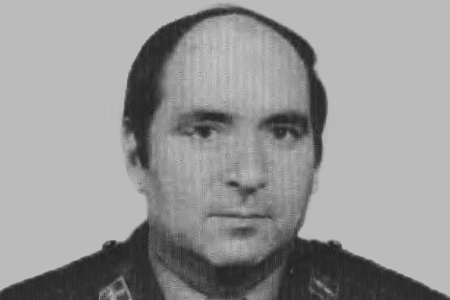 Cristóbal Martín Luengo had nearly reached his home in the Arangoiti district when he was shot in the back of the head. His wife and daughters rushed to his assistance, but there was nothing they could do to save his life. Cristóbal was taken by ambulance to Basurto Civilian Hospital, where he was pronounced dead on arrival. In the attack, Julián Pérez Gómez also received minor injuries from a ricocheting bullet.

The members of ETA who perpetrated the attack had got a taxi in Guecho and asked to be taken to the sports centre in Archanda to fetch some guns. They picked up a third individual on the way. On reaching the victim’s home, two of them got out of the taxi to shoot the second lieutenant while the other waited behind the wheel.

In 1997, Cristóbal’s killer, ETA member Joseba Koldobika Begoña Ibarra, was sentenced to 33 years in prison for the murder. He only served nine years before he was awarded conditional parole on grounds of depression.

Cristóbal Martín had been stationed in Bilbao for twenty years. From 1983 he performed administrative work at the Military Government of Vizcaya.