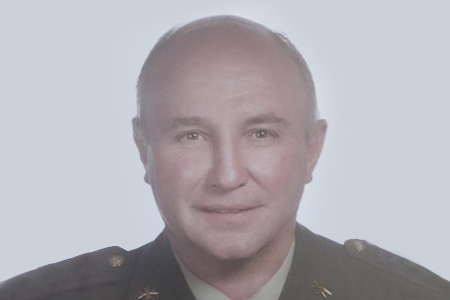 Born in: Madrid
Age: 58
Offspring: 3
Marital status: Divorced
Job: Colonel in the Air Force and doctor
Date of the attack: 16/10/2000
Place of the attack: Sevilla
Weapon: Gun
Killed by: ETA

On the evening of 16 October 2000, someone called the private clinic of Colonel Antonio Emilio Muñoz Cariñanos asking whether the doctor was there. Shortly afterwards, at around 6.15 pm, an ETA terrorist appeared at the surgery of the officer, who worked as an ear noise and throat doctor in the afternoons, and, without saying a word, shot him several times in the head while another ETA member guarded the door. Antonio Emilio Muñoz was killed instantly. During their escape, the two ETA members ran into the police and a number of civilians who noticed their suspicious appearance, leading to their rapid arrest. Terrorists Jon Igor Solana and Harriet Iragi Gurrutxaga were convicted of his murder.

Antonio Emilio Muñoz Cariñanos had a degree in medicine, specialising in otolaryngology. He was also an air pilot and, as an officer in the air force, the had taken part in the Gulf War. He was stationed in the barracks of Tablada (Seville). As a doctor he was well-known among leading singers and journalists.